The Smoke, London’s International Larp Festival, was a weekend of shortform larp (blackbox, freeform, and so on) held in London at the beginning of January. I was on the organizing team, together with Dominika Kovacova, Jamie Harper, Jost L Hansen, Karolina Sołtys and Michael Such. (We’ve since been joined by Laura Wood.)

The idea had its genesis at Solmukohta last year: the various UK-based attenders met up there one evening, and agreed that we really ought to have some kind of focal event that brought international larp to the UK and also showcased UK larp to the world; that got British and British-based larpers from different traditions mixing together and sharing cool stuff with each other and with visitors from overseas. Larp was invented in the UK[1. (Or “in what’s now the UK”, if you prefer to count from Elizabeth I rather than from Treasure Trap.], and we have a tremendous depth and breadth of larp diversity here: but we’ve not generally been very good at interacting with the outside world about it – until recently.

We also wanted to celebrate London as an international city – the place where over 300 languages are spoken, where for centuries people have come from all over the world, seeking refuge or fortune or excitement. Internationalism is under threat everywhere, and those who believe in it have to stand up and make their mark. 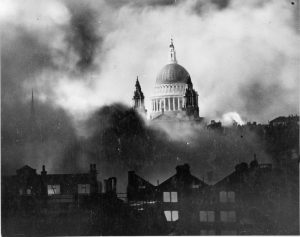 (The name ‘The Smoke’ is an old nickname for London. I’m not sure we ever explained that anywhere, but we probably should have.)

We were inspired by the great experiences that we’d had ourselves attending events like Grenselandet, Stockholm Scenario Festival, Black Box Copenhagen, and Minsk Larp Festival – and we liberally copied ideas and good practice from those. Thank you, organizers of these terrific celebrations of larp!

It took a while to find a good location, but eventually we ended up just by the southern end of London Bridge. The Nursery Theatre provided blackbox and general larping rooms; and The Old King’s Head, a traditional London pub, was the evening social venue. Plenty of time to talk and mingle was an important part of the event’s purpose – we wanted people to make meaningful connections across borders and boundaries. 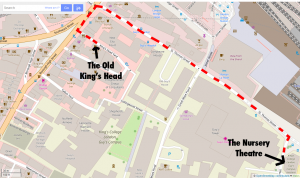 Shuttling between the two venues

As well as the main festival, we partnered with the excellent Res. gallery, in nearby Deptford, to put together an event on the preceding Thursday evening. In Conversation, organized by Sarah Jury and Jamie Harper, was a fantastic discussion/workshop about the interface between art and larp, with a really good mix of perspectives and experiences among the 30 or so participants. It felt to me like a very stimulating and enriching conversation, which fed into a bunch of programme items at the subsequent Knutepunkt.

I won’t drone on in detail, but basically it seemed like The Smoke went pretty well. We had 86 people attending, from 14 different countries: and 20 different larps ran, in four timeslots. There were various unexpected things to deal with, but they all got dealt with, and there were no disasters. The feedback was generally positive, and we’ve learnt a lot for next time.

Because yes! – there will be a next time. We’re aiming for the same time of year; a bit bigger, a bit better, a bit smoother. The first challenge is going to be finding either additional or new venue space that’s affordable. If you know of anywhere suitable, let us know!

(Inbetween organizing duties, I did get to play in one larp at The Smoke – Old and Wise, by Jantine van den Bosch. It was a really affecting and moving experience, framed in a clever and effectiv design. Recommended!)