I went to the second Tallinn Larp Festival! It happens in a community centre not far from the historic part of the city, and it had about 40 people – a nice mix of Estonians and internationals – playing 14 different larps across four slots. 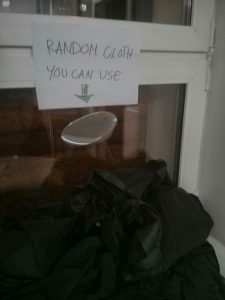 Black cloths, made generally available for ritual and ghosting use

I ran Real Men, the co-created larp about masculinity and maleness written by Kevin Burns and myself. It’s been repeatedly and heavily revised over the last couple of years, but I think this 4-hour chamber version (there is also a day-long workshop version that’s aimed at non-larpers) is pretty much there now. The script needs some work before it can be published, but it shouldn’t be too far off. (He said, recklessly.) 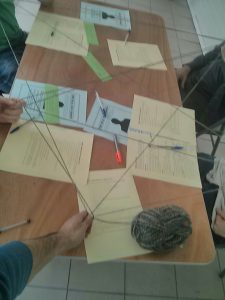 I played in a few larps too. Welcome to Hard Times (David Owen and Karolina Sołtys) is a strongly fateplayed larp about the rise and fall (and rise again and fall again) of a small Western town, based on the novel by E L Doctorow. Interesting characters and situations, with attention paid to relationships as well as individual journeys; and a nice mechanism for repeatedly building and destroying the town’s buildings, made out of chairs and an assortment of tactile and appealing props. 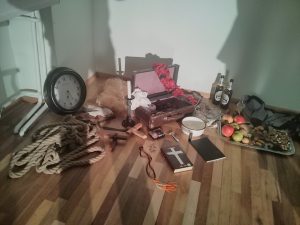 Assortment of town-building materials, from Welcome to Hard Times

Creator’s Fair (Francesco Rugerfred Sedda) had run at The Smoke, to much appreciation, so I was glad to get the chance to experience it in Tallinn. Set at a late-Victorian exposition, pairs of players were inventors and their obedient humanoid automata, being shown off in the hope of glory. It was a powerful and thought-provoking exploration of the controller/controlled dynamic, and of social reaction to these highly-imbalanced power structures.

Finally there was Mono, by Fredrik Hossmann – in an imaginary future society where polygamy is the norm, those who have monogamous urges must be treated in special reformatory clinics. We played such characters, undergoing group therapy and a range of treatments. This was full of ideas but felt a little over-structured, to me – as though there was a bit too much activity to allow the subject to breathe properly, in a fairly short slot. Still well worth playing, though!

The rest of the festival 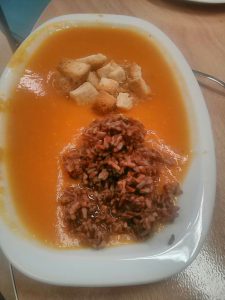 Food was included and delicious: comfortable nearby accommodation was cheap (and actually there was free sleeping space at the centre). The atmosphere was warm and friendly, and the organization smooth and capable. The programme of larps was varied and from diverse backgrounds. I hope to be back next time – you should give it a go!