Last weekend I was at this larp in France. Designed and organized by Muriel Algayres, supported by Association Rôle, it was for 26 players and was set in 1913 during the decline of the Ottoman Empire. This was the third run. 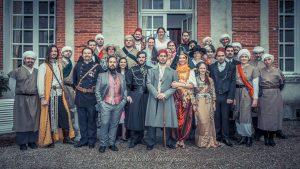 Group photo at the start of the larp, by Jerome Verdier

Life and death in Morta Siyah

The setting was a small (fictional) vassal sultanate in the Balkans, with characters being members of the court, servants, and visiting diplomats and their families from Western Europe: the story was one of ending the Sultan’s rule, dissolving the existing structures, and transitioning to a more modern form of state.

The larp is written in the characteristically French ‘romanesque’ style – documented at length in various articles. It mixes the grand sweep of political turmoil with personal drama and romance, like a chunky classic novel. Communal narrative arises from strongly-drawn characters and their aspirations, actions, and interactions. To this tradition, Muriel has introduced equipment drawn from Nordic larp practice, such as several standard metatechniques, and a day of preparatory wokshops.

In the fiction, Turkish (the Morta Siyah court language) was represented by English; while the Westerners were able to speak French among themselves. This allowed for an international mix of players (me from the UK, one from Canada, two from the Netherlands, six from Spain) while preserving a language barrier in keeping with the setting. Although in practice all the French players spoke and understood English, and several of the international players had at least some French, it was useful to be able to play upon incomprehension and inadequate/deceptive translation.

I don’t know if it’s the same in France, but in the UK, the word ‘harem’ is inextricably associated with sexual decadence – to the extent that its presence in the title of this larp might lead people to expect or fear a salacious experience. Hopefully needless to say, it was not like that at all. The harem of Morta Siyah was the locus of power for the female characters; a contrast with the male-dominated world outside; a gilded cage, which could within its walls confer a kind of freedom; a symbol of the ‘old ways’ that were to be swept aside; and further layers of meaning, probably different for each character. It was a powerful indicator of the Other.

Muriel has written about issues around female characters in a gender-separated patriarchal setting, so I won’t recapitulate her thoughts. It seemed to me, from the perspective of a male player, that considerations of gender had been thoroughly thought-through, and that female characters had meaning and agency. But perhaps a female player would need to write about that aspect. 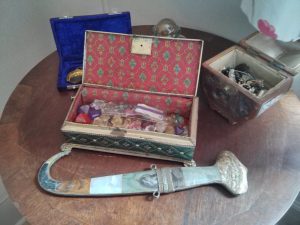 Some of the Sultan’s valuable paraphernalia

The game included several eunuch characters – castrated males. They were played by players of any gender. Eunuchs, although lowly servants for the most part, had power and freedom conferred by their necessity as intermediaries and agents. Social ‘invisibility’ meant that they could listen to every discussion, read every message; and they were able to come and go as they pleased in all parts of the larp, a privilege that none of the other characters had. We were also made aware that despite being incapable of reproduction, eunuchs were not devoid of sexual desire, still less of romantic inclinations: and several storylines played out around these aspects of eunuchhood.

However, saying that, they were still servants, who got ordered around, and who had to stand and wait on their masters and mistresses. Only the higher eunuchs were played by players – the really lowly ones, who fulfilled basic tasks, were NPCs – but even so, it’s a tough social disparity to address. I would be interested to hear, from the player of a eunuch, what that aspect of their experience was like.

So of course this is what I am most interested in. There was a lot of backstory – both in general, and personal to each character. It was really important to read and absorb this, to make the setting feel alive and convincing. Characters had secrets – of the novelistic type, such as unknowingly being the child of one of the other characters, or having been responsibile for the death of someone else’s loved one. These were expected to be kept secret before play, and to emerge during the game when dramatically appropriate.

The larp was divided into three acts, which accelerated – the first act was 17 hours (including overnight) of status-quo normalcy, to establish the background; the second act was 9 hours of uncertainty and spiral towards doom; and the third act was 3 hours of essentially conclusion and shake-out. Each character had their own suggested narrative arc – a generalized fateplay – to take them through this sequence. But a good deal was left open for exploration: rather than goals, or specified aims, the characters had questions about what sort of person were they going to be, where were they going to go, how were they going to resolve various open issues – and so on. 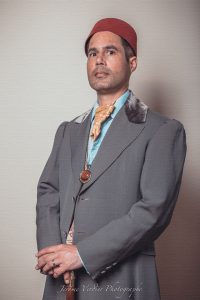 Me as Sultan Murat Halil (photo by Jerome Verdier)

My character was the Sultan of Morta Siyah, who basically had to make the big decisions at the end about the fate of the realm and of its various members, against which people’s personal stories would play out. I did have a good assortment of personal stuff too, to mix in with that – so play didn’t feel too instrumental – but all the same I had to do a good deal of steering, which for me personally tended to fight against immersion.

I think it’s a fascinating design style. We have in the UK a niche but long-standing tradition of weekend games with predesigned characters, which similarly have a load of backstory and secrets and so on (like Café Casablanca) – but they tend to be story-driven rather than character-driven. By which I mean that the characters can sometimes feel like the vehicles for cool stories to be told and portrayed, because of being enjoined to pursue a set of instrumental goals which are like the teeth of the story’s cogs – rather than story emerging organically from the characters themselves. 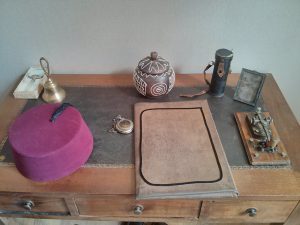 More of the Sultan’s paraphernalia, including his private telegraph

Recent years have seem more character-driven play in short-form predesigned-characters larps in the UK (Burning Orchid and Love Letter spring to mind): but in longform larp, character-driven play is mostly seen in games where players have created their own characters (like A Foot on the Stairs). I’d like to explore this area of design thought a bit more, but I’ll come back to it in a future post perhaps.

Whenever a larp is set in a culture not one’s own, there must always be the question of respect. Other people’s history and cultural practices are not to be appropriated lightly. This may be particularly a danger when drawing on a culture which has long been damagingly exoticized – the Western European view of the Ottoman sultanate is the textbook case of orientalism, and a great deal of harm has been done to the people of that part of the world by the prejudicial and ignorant views thus inculcated in Westerners.

It is not really for me to make a judgement on this. But I felt that the design handles Ottoman culture respectfully – its exoticization by the visting Western diplomats is played on actively as a conscious theme – and in play, participants did their best to treat the source cultural-historical material with the respectful attitude that it merits.

Oppression – social, gender-based, political, familial – was an important theme in this larp. Combined with the emphasis on patriarchy, it might make you think of Brudpris, which I wrote about here a little while ago. Although there are some similarities, it was a very different play experience.

Brudpris was strongly theme-driven – built around its themes, with the characters being means of exploring and expressing them. Each character was only a couple of hundred words in length, if that; and everything was transparent. They were entirely human, and entirely playable – but I guess to make them so, we had to put a lot of ourselves into them – and that was what made the experience so powerful and affecting. Oppression was constant and unrelenting, with the setting being an isolated bubble in a somewhat fictionalized world, so the focus was powerfully inwards.

Harem Son Saat on the other hand was built around its characters – their experience and feelings as people was the bulk of the design. We were aware of the larger real-world historical frame, and the political plots while not ‘important’ from a design point of view – they weren’t going to affect the end of the game, or the fates of most of the characters – were important in-game, and occupied a lot of at least the male characters’ time.

Back view of the Chateau de Cernay

(This is all just from my own point of view, of course – other players may feel completely differently, and that’s absolutely OK. This is neither a review nor a critique: just a personal account.)

I found Harem Son Saat to be a tremendously enjoyable and affecting experience. The organization was wonderfully smooth and efficient; the venue (an old hunting-lodge in sourthern Normandy, not far from Paris) was thematic and beautiful; the characters were wonderfully realized, and the players and crew did a fantastic job of bringing the world to life.

If I say that it didn’t change my way of thinking about life – in the way that Brudpris did and some other larps have – that is not meant to be faint praise. You don’t always want to be emotionally torn-down and re-built at a larp – sometimes you want to have a thoughtful and moving and entertaining time. And Harem Son Saat delivered that beautifully.