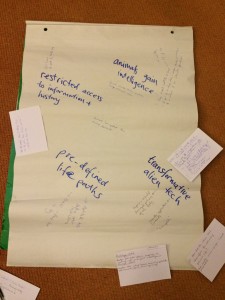 The other weekend I got the chance to playtest Rise and Fall, a new (GMless and prepless) storygame by Elizabeth Lovegrove. It’s about how dystopian societies come about, how life is under them, and how they eventually collapse. It’s a world-building game; by which I mean that while it’s full of conventionally-roleplayed scenes, the overall thrust of the game is to mutually construct an imaginary society and to develop an overview of its history. The personal dramas embedded in scenes serve mainly to illustrate details and workings of the larger picture.

It is still in dev, so I guess there might be some changes, but this is basically how it works at the moment:

Your archetype defines the sort of characters that you personally will play during the game. You might play several different characters, but they’ll all have their archetype in common: they might all be artists, or child prodigies, or jaded warriors, or whatever you choose. The individual examples of the archetype that you play are called avatars. In general a given avatar will either be High (one of the rulers/leaders/beneficiaries/people who make a difference) or Low (peons/victims/sufferers/rebels).

This is in three phases: Rise, Established Order, and Fall. Each consists of N scenes (where N is the number of players: 3–5).

That concludes the Phase: on to the next Phase!

This is a brief phase examining what life is like after the dystopia has fallen. For the surviving avatars, what is now harder, scarier, more difficult, that it was under the previous order? Or, what are the opportunities that they now have that they didn’t before, and how will they take advantage of them?

So my description’s all quite dry so far, but the game in play wasn’t at all so: it was very affecting. One thing which made it really quite emotionally powerful was the interaction between avatars. In general a scene will either be High–High (these are good for showing why the system is as it is, what the benefits are for those at the top) or Low–Low (these are good for showing how people are suffering under the system, and what undercurrents are stirring against it), or Mixed (one of each). We found that the Mixed scenes in particular were able to create a real poignancy, showing the disjuncture of people’s hopes and possibilities.

Although avatars are very thin (defined by maybe two words of archetype and then two words of specificity) they can quickly come to life when placed in the dystopian world which is steadily crystallizing around them as the scenes play out. Rotating creative responsibilities, and encouraging discussion around scenes, makes for a coherent world and a shared narrative drive.

Children of the Lens

The obvious comparison is with Microscope, which also uses representative played-out scenes to inform and illustrate the development of history. I guess in theory you could do most of what Rise and Fall does within a Microscope session, if you structured accordingly. But I don’t think it would be as good. The advantage of Rise and Fall being a dedicated dystopia explorer, rather than a general history tool like Microscope, is that the structure and mechanisms are devoted towards that aim, and they combine to generate narrative power and emotional depth.

Rise and Fall is due to be published by Pelgrane Press later this year as part of a storygame anthology also including When the Dark is Gone, enthused about here already. I don’t know what else will be in it, but if they’re all of the standard of these two, it’ll be the must-buy release of the year!