“Who will you be? The tearaway debutante? The stalwart father figure, bent on political supremacy? The Machiavellian footman? The kind housemaid, trying to meet the divide?
Will you rule from above, or below?”

A Foot on the Stairs was a weekend larp for around 60 people, at the beginning of February, held at this rather fine former manor house in Staffordshire.

I’ve not been involved in mainstream larp in the UK for some years, having concentrated my time in the chamber larp area and particularly in the species known here as ‘freeform’ (not to be confused with the games that are called ‘freeform’ in continental Europe and the USA). The two sub-hobbies don’t cross over very much at all. So although A Foot on the Stairs is not at all typical of mainstream UK larp, it was designed and mostly played by people coming from that background and with expectations formed there: it’s interesting to look at the way it converges or doesn’t converge with the weekend chamber larps emerging from the UK-freeform tradition.

(I should note that this is just my opinion, I didn’t speak to everyone involved in the larp, and so on. If you disagree vigorously or think I’ve got something wrong, sorry about that! – please do comment below to help straighten it out.)

Things that a UK-freeformer would have found unfamiliar

Beforehand I think the little group of us who were regular UK-freeformers were wondering if there would be enough interest in just playing a character in a sandbox for a whole weekend, given the absence of secrets and GM plot and so on. Some might feel that fear was justified, but in my own case I certainly had plenty to do the whole time. My character was a busy and pro-active one who started various interaction threads himself and also got drawn into other people’s. I would say I easily had as much to do as I had on weekend-long UK-freeforms I’ve been to. But it felt much more fulfilling, because it was all stuff I’d chosen for myself to do, rather than a list of tasks that I’d been assigned by a designer.

One interesting aspect of the larp was that about a quarter of the players were playing servants, who spent much of their time serving, attending to and cleaning up after the others who were playing the noble family and guests. This didn’t appeal greatly to me when I read about it (I feel like I spend enough time doing housework at home), but those who went for the option seem to have enjoyed it – of course, they also had their own interesting servant life and stories, between work tasks, which went on out of sight of the toffs. 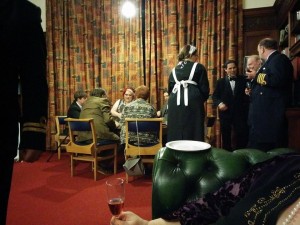 I kind of feel that if there are successor events then I ought to take a turn at being a servant, because the setting works better and is fuller and more rounded for their presence. Although waiting on socially arrogant people who don’t say ‘please’ and ‘thank you’ and are generally high-handed is going to be a real challenge.

There was a discussion before the game about how to represent prejudices of the time (re class, race, gender, sexuality) in ways that players would be comfortable with while not belying the historical truth. Not everyone had the same preference, but it was agreed calmly and sensibly, and (as far as I could see) stuck to. See here for details.

I thought this was really good to get upfront. Would like to see similar policies at more of the larps I go to. (There was a similar debate and ruling about representation of firearms.)

So A Foot on the Stairs was unusual in UK larp for being a one-off (although, ironically, because of its success, sequel events are now being planned…) and for its extremely light ruleset and light designer/GM hand. If it represents a trend, that’ll be great from my point of view, because I’m much more interested in this sort of thing than the fantasy campaign style on which UK larp was founded and which still forms the mainstream. I’ve been told about a couple of other larps, Tales out of Anchor and The League of Small Nations, which have some elements (and some people) in common with AFotS, so I’ll be checking those out.

If you’d come to the larp from one of the Nordic countries, what might have surprised you about it? Of course one can’t generalize across the differing larp scenes of the different countries, but comparing it to the ‘prognorp’ Knutepunkt-influenced productions, this is what struck me:

I had a great time at A Foot on the Stairs: one of the more memorable and enjoyable roleplaying experiences of my life. This was partly thanks to the open design, which allowed me to build my own story at my own pace: but mostly thanks to my fellow-players, who were fantastic at portraying characters, and also fantastic at generating ideas, hooks, plot strands and all the other ‘content’ that built towards a really gripping and satisfying climax for the weekend.

It’s really good to know that this sort of stuff is happening in the UK, and to have met lots of the excellent people who are doing it!