Back in the autumn I played in Brudpris, a one-off weekend larp designed by Anna-Karin Linder and Carolina Dahlberg. This was the third run, and was organized by Mads Dehlholm Holst, Mads Havshøj‎, and Oliver Nøglebæk, at a scout hut in Denmark. It was played in English, and there were 51 players, from (I think) 12 different countries. 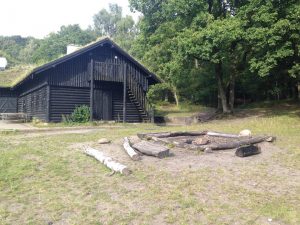 The venue, with bonfire site – which would become very important. Photo by Mads Havshøj.

Brudpris is hard to write about, because it deals with very difficult and painful subject matter. And there’s a strong need to keep the group’s experiences within the group – not to be public with what happened. Because some deep personal stuff was felt and expressed: and we as players have to respect and trust each other. So I can only really write about it in quite general terms. Read on, if you want to find out how interesting that is or isn’t!

So the setting for the larp is an imagined rural Scandinavian community in the early 20th century, in a world mostly like our own. The Mo people (you can see why I wanted to play) are viewed as backward and sheltered anthropological curiosities by their civilized neighbours, a bit like the Amish in our own world. But to themselves, they are a haven of moral purity in a sick and decadent world which they want nothing to do with.

The Mo culture is defined by honour: of the individual, of the family, and of the community. Most important is the family – which is strictly patriarchal. The father, or in his absence the oldest adult son, is an absolute dictator. The family’s honour, and by extension that of the Mo, rests on his shoulders, because of an oath he took on attaining manhood. He has the right to rule, and to punish, as he sees fit.

Women in the Mo world are chattels, of their fathers and then of their husbands. (Marriages are arranged by the fathers, of course.) But they are also feared, as the source of sexual power. This has to be constrained and suppressed by their menfolk.

The larp itself is structured around a celebration where two Mo towns meet together to marry off their young people. Each father of a girl must pay her prospective husband a bride-price to take her on; low if she is docile and obedient, high if she is free-spirited and sexually charged – hence the larp’s name. The weekend encompasses the return of boys from their wanderjahr in the outside world; the ceremony by which they become men; the ceremony by which the girls become women; arrangement, and execution, of marriages; a celebratory party; and the departure of the new couples to their conjugal homes.

There are a bunch more details to the society and to the structure  that I won’t go into here, but take a look at the Brudpris website – everything is up there, it’s a totally transparent design. The characters are also there, and that is them in full, not just a summary – you get a para or so for your family, and a para or so for you individually. It doesn’t look like a lot, but with a bit of OOC family discussion beforehand, and some workshopping, it proved to be plenty enough to generate play.

I guess the question will be, if you’ve got this far: why would anyone want to play in a massively sexist, repressive, punitive, silencing kind of society? It doesn’t sound like much fun. I can only answer what I always do: larp, like film or theatre, is an artform as well as an entertainment medium. It has the right and the duty to examine the dark aspects of humanity, as well as the easy stuff. In much of the world, families are still run along lines not so different from the Mo; in ‘socially-advanced’ countries, that was so for our parents or our grandparents; and, most importantly, we still live in a patriarchy and we still bear the behavioural signs of that. Brudpris helps shed precious light into those dark corners. 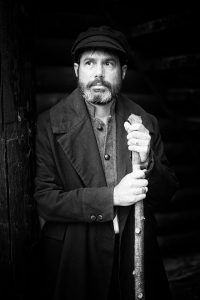 My character, Rune, towards the end of the weekend. Photo by Michal Kára‎.

Keep it in the family

Everyone who played had a different experience, and for some it was more positive than others. The tight structure means that you’re closely dependent upon the other players in your immediate family – you have to touch in frequently, and support each other in play. I was lucky enough to be familied-up with some lovely people who worked hard and creatively to make sure that we all got as much as we could out of it.

So for me personally, Brudpris was a powerful and deeply-affecting experience. I was able to explore thoughts and feelings via physical experience – that amazing transformative thing that only larp can do – and to hopefully become a slightly wiser and better person as a result. But I’m not going to say that it’s for everybody, of course. If you’re not called to it, then that’s fine, there are plenty of other larps.

Finally to add that I think Brudpris is a really admirable piece of larp design – an inspiring example of how to generate play from a set of premises. Every detail shows the signs of painstaking thought. The designers have written this fascinating article about their experience with it. And the organizing team did a fantastic job of bringing it to life for us – I’m very grateful for the experience.