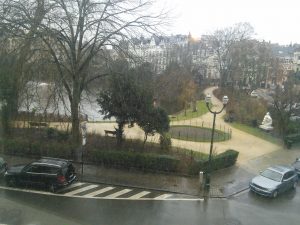 Brussels not at its best in this weather.

This is still January, but we’re getting a bit closer. I got the Eurostar to Brussels and had a lovely weekend with friends!

The ninth in a series of day-long house cons run in Kessel-Lo, Leuven – but the first that I had made it to. It was great to see good friends who I usually only catch at Consequences, and to meet a bunch of nice new people too.

I ran The Best Medicine – its third outing – and it went pretty well, with a great set of characters being created, and some terrific angst at the end. The players timed the finale just perfectly.

After this run I was pretty happy with the larp, so it’s now up on my website for anyone who wishes to download it and run it. If you do so, please do let me know how it goes!

After that I played in Jason Morningstar’s tabletop rpg The Skeletons. This is a fun storygame where you play a bunch of undead tomb guardians who intermittently animate in order to repel threats, and during those windows can also reconstruct their backstory — hopefully, finding a satisfying explanation of why they are there and how they feel about it, shortly before being inevitably destroyed. And you get to draw stuff, which I always enjoy.

The Skeletons does require some fairly heavy lifting from the players, but experienced storygamers will be able to build some really strong and moving material. We had a thoroughly nice session! 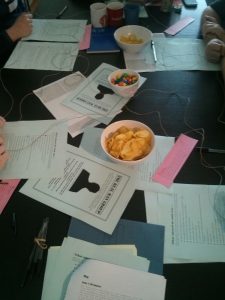 The ‘ball of yarn’ connection-builder that forms part of the preparatory workshop for Real Men.

The following day, back in Brussels, was devoted to paired larps about gender roles. I ran Real Men, while Elina Gouliou ran Women on the Verge… in the flat next door. And afterwards both sets of players got together to eat and to chat about their experiences.

It was a good and effective run of Real Men – there was arrogance and hierarchy at the start, there were tears and hugs by the end. WotV… apparently went well too, as it always seems to. I am really humbled by the way that these larps have been welcomed by their players, and in particular by the number of women who have run WotV… for their friends.

I’m hoping to be back over there in July for another such weekend! And maybe to see a bit of Brussels too.