At the weekend I played in this small, experimental chamber larp designed by Karolina Sołtys with help from the Reactor Core. For five to seven players, it took place on a grassy riverbank (if you can call that a ‘chamber’) and lasted about 10 hours. Content warning: discussion of suicide and mental illness. 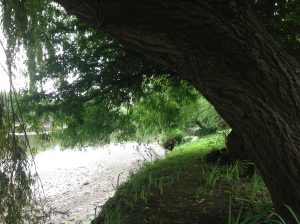 There is a willow grows aslant a brook… (by Karolina Sołtys)

Each player played a character who was a member of an online discussion forum that supported people with suicidal ideation. The five characters had ‘met’ within the context of this forum, and (strictly against its rules) formed a secret suicide pact together. They had agreed to meet physically for one last beautiful final picnic, and then to end their lives together. Each player designed their own character during the weeks leading up to the larp, with freedom as to who they were and the circumstances that were leading them towards suicide.

The initial idea had been to have a lot of online play on the forum (we had a private one which had been created in imitation of real suicide-support forums), developing the characters, creating bonds and links, and generating story via a bunch of NPC forum members. As it turned out, we didn’t have much time for this, and there was a lot less of it than I think had been expected. The result was that when the characters met on the day, they generally didn’t yet know much about each other, and the initial small talk was suitably awkward.

I felt this actually worked pretty well. Having a load of mutual backstory, even if only of a virtual kind, wouldn’t have helped my own experience. It seemed like the limited contact that our characters had had – and the necessary level of trust that they had developed – was about right for the tension between comfort and discomfort in their meeting.

Play was continuous, immersed and naturalistic, except for a metatechnique that allowed internal monologues to be given, and to be requested from other players. (We used a vaper that was passed around the group.) The character designs had been shared transparently throughout the process, because it was felt that first- and second-person steering would help with play: the vaper metatechnique was intended to allow further steering request and expression. 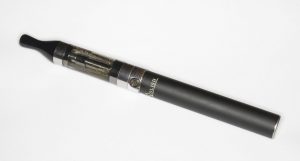 A vaper (by Jacek Halicki, on Wikimedia Commons)

We also had a phone, that could be used to call NPCs if required: a very kind and generous friend was standing by to play them as required. This got used I think twice, when characters were in need of an external push in one direction or another.

Karolina gave a great deal of thought to the tone of the game. To quote from the initial design document: “I’m inclined to have the character design pull towards the negative, while the game structure pulls towards the positive […] I don’t want the game structure or the relationships to force characters into happy endings, but just to provide an option other than sitting in the corner and crying.”

We all felt strongly that the cliché happy ending, where everyone neatly persuades each other to live, would be dishonest. (Cf Nick Hornby’s A Long Way Down.) But we also didn’t want to spend the day playing being miserable. We needed to find enough humanity within the characters to have them make their last day enjoyable or at least bearable, even though life as a whole might not be. 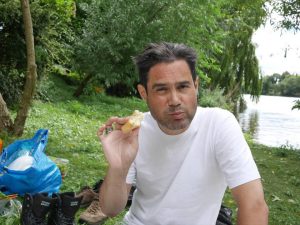 My character, making the most of a particularly chewy baguette

This is the end

The whole event was soundtracked with a selection of music that we’d communally assembled beforehand. At an agreed time, the music shifted to a different soundtrack – one ‘end’ track chosen by each character, lasting a total of 30 minutes – and one of the characters distributed suicide pills. Each character then had the choice of whether to go ahead with the act or not, before the end of the larp.

Of course, a larp about suicidal people is open to a lot of potential criticism. Firstly, is it possible to roleplay suicidal characters in a manner that’s sufficiently respectful and understanding of the suffering of people who have such problems in real life? Secondly, is it possible to roleplay this subject matter in a way that’s psychologically and emotionally safe for participants? And thirdly, is it poor taste to even be doing such a thing?

Taking those in reverse order: arguments about taste are very personal. This run of The Suicide Club was larp as an instantiated piece of art, not something that’s programmatically being forced upon (or even offered to) the public. I myself don’t feel that an artistic creation has to defend itself in terms of taste: anyone who doesn’t like the idea on taste grounds should just avoid reading about it.

Safety is more of a concern. The players in this larp were carefully selected, and had a great deal of experience of intense larp together, and familiarity with each other’s needs. We had standard safety techniques available, but didn’t expect to need them (and didn’t). This absolutely would not work at all as a pickup game with a group of random larpers – the risks would be too great. So while this run of the larp was a safe one, you can’t necessarily just translate that across to other runs.

Most importantly (to me), I think the larp was entirely respectful of its subject matter. While not striving to be a psychiatrically-accurate parade of test cases, the characters were designed as real people with real problems and real reasons for contemplating ending their lives. I’m not going to speak for the other players, as their lives are their own, and none of anyone else’s business; but I brought my own experience of depressive mental illness to the process, and I used my own thoughts and feelings, and those of other sufferers who I know, to create a character who was close to home in some ways and away from home in others. I personally found the whole process of developing and playing my character to be enlightening and thought-provoking, as well as being rewarding in the more common human sense.

I feel strongly that we as a society need to talk and to think more about mental illness and other life disorders that can prompt suicide. For some people, a roleplaying experience like The Suicide Club will be a powerful and humbling way of exploring the subject.