I’ve recently run a couple of small chamber larps in London. I like the intimacy of a small group of players, and the way that everyone is involved in everything. It makes for a very tight focus on design, and needs every element to be working together. The ‘standard’ length is usually around 4 hours including post-game workshop and post-larp debrief, which usually means say an hour and a half or two hours of actual play.

(I’m distinguishing ‘chamber larps’ here from more freeform[1. Non-UK meaning.]-y scenarios by the use of these sliders[2. In the Mixing Desk of Larp sense.]: once play starts, it’s continuous and in real-time; and there is minimal or no GM intervention during play.)

The Life of Mermaids

“You are a family that drowned recently in a boating accident at sea, and all of you turned into mer-people. Some of you may be uncertain of how you feel about it; some may be afraid; and others may be enjoying themselves. You are all still adjusting to this new situation: and at the end of the larp you will have the option of staying in this undersea world, or rejecting it and instead going to whatever afterlife you believe in.” 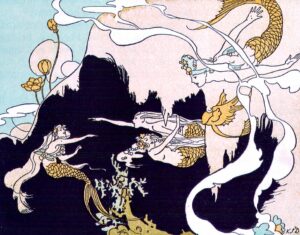 This larp grew out of a workshop exercise at Solmukohta 2016. I was running a workshop about techniques for connecting characters together in chamber larps, and as part of it we split into groups to imagine larps and discuss what might be good connection techniques for them.

Larpers being larpers, all four workshop groups went on to imagine the actual larp in much greater depth than the exercise required… including my own group. So together with Olga Rudak, Mira Suovanen, Jouni Karppinen, our idea became The Life of Mermaids, and eventually became a full larpscript and got published: here.

Jouni had run it in Finland earlier in the summer, but this was my first go: with a lovely bunch of players who created a nice but slightly disfunctional family, drowned them, and got to grips with the fundamental dilemma of the sea: to merm, or not to merm? Some resolved some issues, some grew up, some learned acceptance: all in all, it was a very human journey.

The ‘silent-movie-style’ scene of the boat sinking, which immediately precedes the start of play proper, was powerful and effective – and the choice of Radiohead’s ‘No Surprises‘ as theme song was a really good one, so thanks to whichever friend it was who suggested that.

Hoping that now the script is out there, other people will run and play it – I think it’s a really nice piece of work, thanks to my co-designers’ brilliant ideas, and a lot of fun as well as emotionally deep.

Bring Your Own Bottle

I played this larp myself at Grenselandet 2015, and had a really terrific time, making drunken friendships. The setting is that a group of close friends have each decided to give up booze: they have one last blow-out together. Since trying it out, I’d been wanting to spread the love by introducing more people to it.

In London, it ran with four players, and it was terrific! – they all seemed to like it, and from a GM’s point of view it’s very easy and pleasant. The players drank, laughed, drank, commiserated, drank, danced, drank some more, and eventually fell into a comatose heap. Beautiful!

Afterwards, players commented favourably on the same important aspect that had struck me when I played: the larp’s (diegetic) rule that there could be no negativity during the swill-session. They felt that this gave their characters permission to open up areas that were sad and difficult, knowing that their friends would guide them back to warmth and safety. It is really interesting to me, as a designer, seeing how empowering this small and clever restriction is.

Bring Your Own Bottle hasn’t been published yet – I begged the script from the designers (Nastassia Sinitsyna, Yauheniya Siadova and Alisa Matavilava) – but hopefully it soon will be!

And hopefully I’ll get to run and play some more of these living-room-sized larps before too long. Let me know if you’re interested!

One reply on “Mermaids and bottles”

[…] of which I was a designer. Christi S was running The Life of Mermaids, the larp that came out of the workshop I ran at Solmukohta last year – co-written with Olga Rudak, Mira Suovanen, and Jouni Karppinen – and I made up the […]