Fallen Stars was the sixth and last of Adam James’s series of Nordic larps in London, which he kicked off not long after we got back from Knutpunkt. It’s another from the Larps from the Factory book, which I really cannot recommend highly enough. The designers were Vilde Herning, Nils Hiorth, Magnar Grønvik Müller, Martin Nielsen and Linn Eik Pilskog. 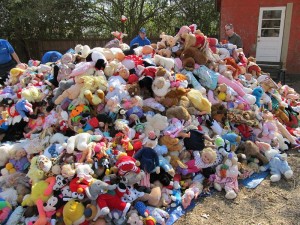 The premise is very straightforward:

“Fallen Stars is a game about old things, once beloved by their owners, but now discarded and no longer cared for. As they languish at a flea market, they dream back to their glory days and hope to find new lives with new owners. They also worry about the uncertain future of those whom buyers will not rescue.”

So: each of the ten players played a different item of junk. We’d been asked to bring some bits along for inspiration, and Adam had provided a bunch too: there were about twenty or so things to choose from, I guess. I chose a battered old tweed hat: other items picked ranged from cuddly toys to decorative knick-knacks to tools, and even a VHS tape (of Krull).

The pre-larp workshop started with some basic warmups and impro techniques but was mostly about establishing some back-story for our items: the people who’d owned them, what they might have witnessed, important external events around the time they were made, and so on. We did this in small groups that were broken up and reformed, so during the course of it we each got to do a bit of establishing with most of the other players.

Erm… so how does that work, then?

Now by this point people who thought “playing an entire larp as a battered tweed hat sitting on a flea market stall is my idea of hell” have perhaps stopped reading already. But let’s hope not, because that would be a pity.

The metaphysic of the game was based on the Toy Story universe. When humans (the stallholders and customers) were around, we had to be completely still and silent, and could only communicate with each other by eye contact. When there were no humans, we could talk and move around freely. The game was broken up into alternating scenes where the stallholders would price us up, move us around and so on, and customers would examine and sometimes buy (us or the other non-character objects that were also on the stalls). Then inbetween they would go, and we’d have the place to ourselves to get to know each other and to discuss.

To discuss what? Lots! Our back-stories, our owners, the ways we’d been used and abused, our thoughts about the various customers, support and counsel for each other, our hopes of getting bought, our fears of ending up slung in the skip to be crushed. I don’t think we were in any danger of drying up for lack of material.

Then, each of us had to at some point during the game direct a flashback – which interrupted play. The flashbacking player told about an incident from their past, using other players to perform the details in charade while giving a voiceover narration: the whole preceded by a piece of music of thier choice. The idea was that this was to heighten and intensify a particular piece of back-story, rather than being shoehorned in awkwardly. So for example when someone asked me how I’d come by a particularly tatty hole I had in my crown, I directed a flashback about when my owner was just about to kiss someone not his wife, but a gust of wind blew me off his head at the crucial point and I went under a bus, putting a considerable damper on the moment of temptation. 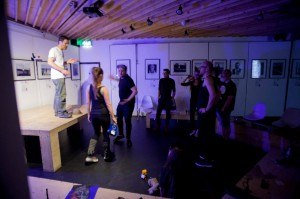 Me directing the bus flashback

It should perhaps be noted that we were kind of embodying the items. I did have an actual physical tweed hat which was in some sense ‘me’, which I was carrying around. But I wasn’t puppeteering it, making it talk and so on. I was just holding it with me as an indication that that was what/who I was. I think this was a bit easier for those of us who were playing more abstract objects – the people who were playing cuddly toys maybe had it tougher trying to resist puppeteering them, as that’s the normal mode of play with such things.

On the other hand they probably had it easier coming up with personalities for their items, and for interesting emotional interactions with their owners and with the other items. I think we all found it a bit hard to relate to the VHS tape (who turned out to have a complex of mostly filthy neuroses about being lent out, viewed, and taped over); and someone else was a hammer, who was very well realized but a bit limited in terms of their range of plausible interactions. Kudos to those players who took on the challenge!

End of the market

I won’t say what happens towards and at the end of the game, as if you’re going to play it, it’ll be more fun for you to find out by experience. Suffice to say that the end for unwanted items is the skip and then the crusher. Before being crushed, each gets a chance to monologue and reflect upon some aspect of their existence or experiences, their hopes or fears. This was really pretty moving.

The major theme is of course about falling out of usefulness and into obsolescence and eventually death: a process we will all face, if we live long enough to. Thinking and talking about this weighty subject from the point of view of non-human items gave an interesting kind of alibi. It meant that while we treated it as deadly serious from the characters’ point of view, we didn’t have to show the same sort of respectfulness that we would have with human characters, I felt. It allowed us to explore openly and fully rather than being restrained by propriety. I thought it was a really interesting and thoughtful way of handling this subject matter, and it was extremely effective and moving.

Another significant theme that emerged particularly during the directed flashbacks was that a number of the items had been treated badly by their owners: mishandled, ignored, passed in and out of favour, used as unwitting agents in larger dramas (eg. as an instrument of suicide). It struck me that this was a good metaphor for the way that people often treat each other: not as objects exactly, but as adjuncts whose feelings don’t need to be fully respected. Each of the sad stories the neglected and discarded items told could have been reframed as a sad story about a neglected and discarded person, with only minor changes.

So: overall a very profound and thought- and emotion-provoking experience. Very different to the last couple of larps that I’d played, which were quite abstract and depersonalized. Fallen Stars got right down into the heart and guts of what it means to be a person, for me. Highly recommended!

(Many thanks to Adam for organizing this series of larps, and to Cat and Hamish for helping with running them!)