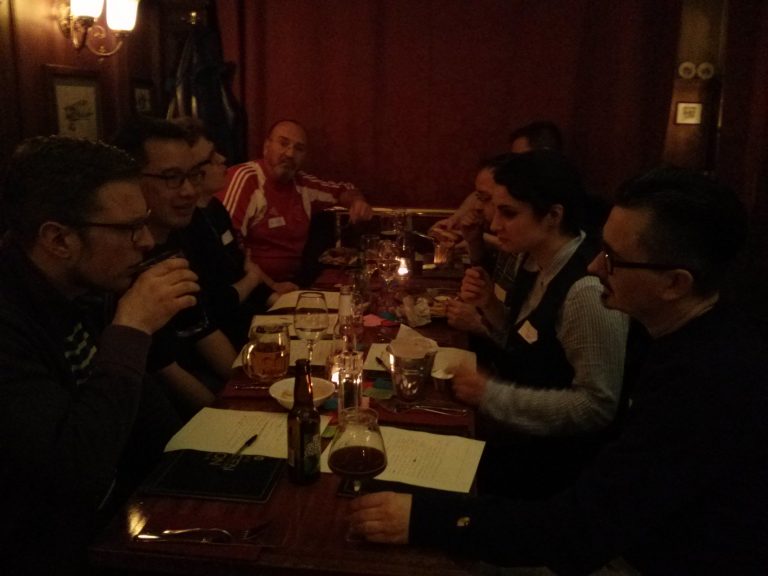 The Drinklings in play (photo by Mo)

The Drinklings started life in a Facebook thread just about a year ago. I was thinking about the historic Inklings sitting around their table in the Eagle and Child pub in Oxford, discussing the progress of their current work.

It struck me that this setup might make for an interesting and/or fun larp. There’s the tension between the participants’ relative statuses in the ‘real’ outside world of the university, and the respect that they each have within this gathering of supposed friends; the tension between the pure pursuit of art, and the sneaking appeal of commercial success; and the fact that some of them had very little regard for the writing of some of the others, considering it to be really just a bunch of silly prancing elves/lions/devils/etc.

So I thought a larp that tracked successive meetings of the group over a period, with life events happening inbetween, might work well as a social event in its own right. It could be played in a pub, with ambient life going on around it. And it could handle a decent range of player numbers. 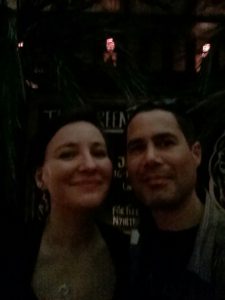 The idea would probably not have come to anything, though, but for the offer of collaboration from the brilliant and wonderful Anna-Karin Linder. She brought a load of amazing ideas and structure to my basic concept; coming up with a terrific ‘lore creation’ system, and making the larp light and playable throughout, as well as building the players’ journey towards an ingenious constructive and positive conclusion.

This was the first time I’ve tried this kind of completely remote co-design (we didn’t actually meet up physically until the day of the first full run…), and I enjoyed it hugely – it was a very fun and harmonious process.

The Drinklings is a pretty simple larp, and it only needed one playtest, which I ran in London in the autumn (thank you very much, those who took part!)

We offered it as an icebreaker event for A Week in Sweden, the social programme that led up to Knutpunkt 2018. It ran there with two full tables of players – 16 in total – in a British-style pub on Malmö’s waterfront. And seemed to be pretty successful! – the players chatted, laughed, and appeared to be enjoying themselves.

Since then, Anna-Karin and I have published the script of The Drinklings on our respective websites, and it’s been translated into Norwegian, and run there and in Sweden and the US and probably a bunch of other places too. This summer I’ll be running it in Belgium and then in the autumn in the UK again.

Do download it and run it, if you’d like to; or just read it. I think it’s quite a good example of how a bit of creativity and some hard thought can generate a lot of enjoyable play from a fairly small idea.