I wanted to do a separate post about the player website that we (where by ‘we’ I mean ‘mostly Cat’) put together for our run of Oh dear! We seem to have run out of time… at Consequences 2014. 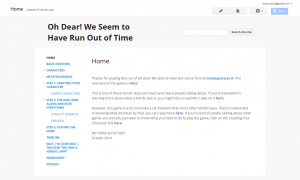 We wanted to explain to the players what the game was about and how it worked, in a bit more detail and with a different emphasis than is present in the script as published by the Larp Factory – which is necessarily brief, and is written for organizers rather than for players. Including the whole ‘explaining Nordic game to UK players’ thing.

And we also wanted somewhere to gather and share information about the characters that the players created, so they could easily refer to it all in advance of the game, rather than having to work through a bunch of emails (as is the usual practice).

Now obviously I’m not holding this up as any kind of model or anything, but if you happen to be running a game like this and you have the opportunity, I think a little player-facing website of this sort can be really helpful. Such things are commonplace for large/long games, but unusual for small/short ones: I would like to see more of them, myself.

Please do let us know what you think, particularly ways in which it could be improved: and of course if you’re running this particular game yourself, you’re very welcome to use any of the material here.