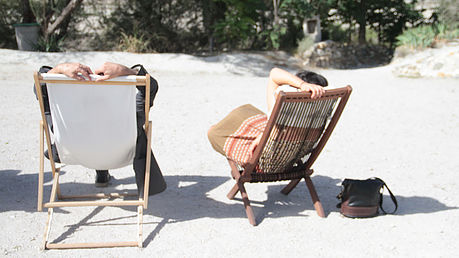 (picture from the first run, by Esperanza Montero)

Have you been tempted by the open sea?
You feel it: passion unbridled with no dull excuses.
The world outside is a faraway grey street
where words are blades that hurt.
This is our utopia of intellect and illusion:
we are the dry-mouthed seafarers,
as wounded as proud, as mad as holy.

La Sirena Varada (‘The Stranded Mermaid’) was a larp run not far from Granada last year and again this year, about a community of dreamers – the deluded, the fanciful, the crazed – who create a bubble of creativity and illusion, outside of the grey reality. It’s inspired by the play of the same name (Alejandro Casona, 1934) and harks back to the dreamlike reality of early surrealist films – nothing need make sense, time flows arbitrarily, relationships and personalities are fluid.

A few of my friends played in the first run, and recommended it: so second time round I dived in. And it was wonderful! Tremendously enjoyable, thought-provoking, creative, and generally a very pleasant experience. 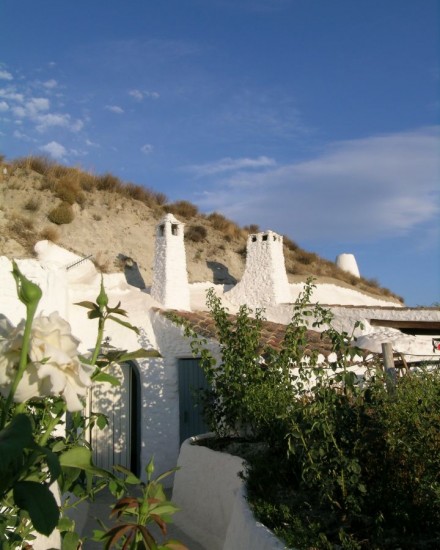 The larp took place in the beautiful Cuevas Al Jatib, a spectacular mountainside setting, with a swimming pool, a hammam (Arab bath), plentiful food and wine, cool and calm bedrooms hollowed out of the rock many centuries previously – it would be a fantastic place for a holiday, never mind larping.

There were 29 of us – the two designers and three assistants (all of whom played characters – it doesn’t need any actual ‘GMing’ as such during play), and 24 players. Who were about half Spanish, and the other half from all over Europe – I counted Russia, Poland, Sweden, Austria, Germany, Italy, the Netherlands, France and the UK. English was the common language of the larp, but we were encouraged to eg. read poems and sing songs from our native languages as well, to reinforce the supernational nature of the community.

Yes, there was quite a bit of performance – because many of the characters were creative people. Music, words, and an improvised play (of Alice in Wonderland) – as usual, I was astonished at how talented my fellow-larpers are!

However, there was no pressure – audiences were required, too. I think probably half the players didn’t perform anything, and that was absolutely fine.

I wrote some poetry – or rather, my character did. He turned out to be a much less bad poet than I am myself!

Toys in the Box

The design of La Sirena Varada is essentially a sandbox – the characters are predesigned in skeleton, the players realize them into rounded people, then turn up and basically get on with it. There is no external plot, no timetable of events, no goal that has to be achieved either collectively or individually. We were in character solidly for about 54 hours I guess, which (thanks to the fluid nature of time) represented a year in the life of the community.

This type of very open design can make players feel uncomfortably unsupported, as though they’re flailing in a vacuum. But that wasn’t the case here. Each character had enough material to work with in shaping their own story arc during the course of the game: and in their interactions, synergies were found, partnerships were made and broken, rivalries bloomed and died. And actually the designers had some bits of structure and other subtle inputs available, if they had been required: so we didn’t feel like we were abandoned in there. 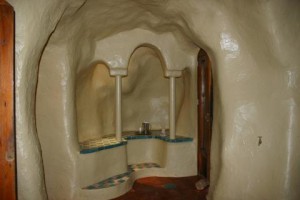 There were a couple of very useful techniques available within the larp, to help work the story. Firstly the hammam – known as the Waters Divine. Entering it and spending time in the water was said to change people – you might emerge with new ideas, or a fresh twist on a problem, or a new way of looking at things – or you might be reborn altogether, and restructure the personality that you presented. Whatever you felt would be good for your character, others would be there to witness and to help.

Secondly the Shadow Space – a dark cave in whose mouth was a red drink. In the fiction this was a psychedelic drug which allowed users to communicate, within the cave, with voices from their past, from alternative lives, from their unconscious, from their imagination. These were supplied by other characters, who went into the cave alongside to support their friend, but who were then able to use voices to steer that character’s play. It’s a very clever way to provide an alibi for different levels of meta in the steering – it might be what your character wants to do to their character, or what you as a player want to do to their character, and in either case it might or might not be what they as a player and/or their character want to happen.
(Hmm, reading that back it isn’t at all clear. Well, it made sense on the spot, anyway. Maybe I’ll get to write more about this and other nice design aspects.)

There was also another technique, in the Other Caves – a primal space where speech was not allowed, and one could get in touch with one’s inner emotions and feelings. But I didn’t use that, and I don’t know what other players might have done there.

La Sirena Varada is billed as “A larp about Mediterranean dreams and red-blooded delusion. About waking up late and enjoying life.” And it certainly lived up to that. 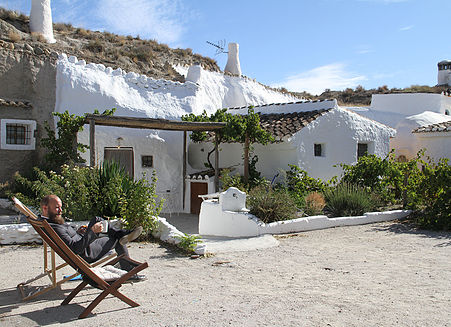 (photo by Esperanza Montero, from the first run)

I think I felt the least pressured that I ever have at a larp. I was immersed in my character, and he did everything he wanted or needed to do, but I never felt expectation or demands from the larp design. If he’d wanted to sit around by the pool all day, drinking wine, that would have been perfectly fine. I found the experience really recharging and energizing.

So it’s intended to run again next year, and that will probably be the last time – after that, the designers are planning to publish the script. If you like what you’ve read above, I strongly recommend giving it a try! And of course do please get in touch if you’d like to know more details etc.