This is a compilation of answers to this question asked by James Stuart:

“Friends who have played in a weekend-long nordic larp (College of Wizardry, Just A Little Lovin’, Mad About the Boy, etc, etc), I’m curious to hear what advice would you give to someone (not me) who is completely new to LARPing on how to have a good time?” 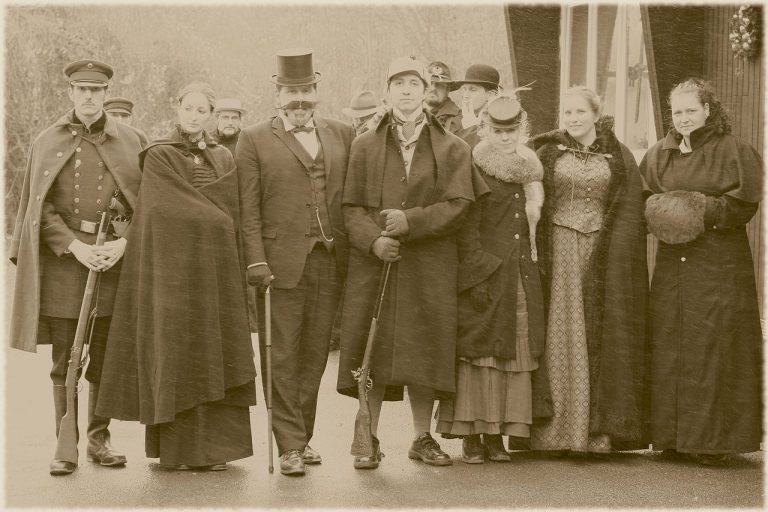 Players having a good time (probably) at Morkay Greve, a German larp with a C19 setting. Photo by Ralf Hüls.

“The best advice I’ve heard is by Søren Lyng Ebbehøj and Lizzie Stark, and that’s the concept of ‘bring your own basket’ to the picnic. Making your own scenes when possible, creating moments of inter-immersion for other people by drawing them in through steering, getting your secrets out there so that they can generate play, externalizing your internal thoughts as much as possible (these two I struggle with a lot), not waiting for the plot to come to you, but rather generating interesting play around you. Sometimes it can be as simple ask asking someone how their day has been or about their background, or it can be as complex as creating an in-game ritual for other players.”
(Sarah Lynne Bowman)

“Manage your energy. I found it essential to take a break between acts, wander by myself and call my wife.
For a game that long, it’s partly about the pleasure of being your character, rather than pushing the story along. I wish I’d left my pushing-the-story-along hat at home. Story happens anyway.”
(Graham W)

“Don’t feel like you have to be doing something every single second. Downtime is ok too!
Actively pursue things that look interesting to you. Don’t stress about the right choices, they’re all right as long as you’re having fun. If you’re not sure about something, check in with another player out of character.”
(Kira Magrann)

“Take breaks. In- or out of character. Drink water, get sleep, wash, eat.
You are not your character, even if someone tries to sell you that idea.
The door is open, and you’re an adult.
Embrace it. Really. You have to believe in it for it to work, and if you do it can be magic.
Have fun, whatever your idea of fun is.
Explore.
Just… be in it. Give it time, now that you have it.”
(Ole Peder Giæver)

“Be vulnerable to the experience, and give yourself permission to let your guard down and try different things and ways of being. Be bold.
Bring earplugs and blindfolds for sleeping, and if a light sleeper, maybe a sleep aid.
Plan to stay an extra day or two after, as people tend to drift more slowly apart, and breaking powerful bonds might be hard. They will congregate in nearby cities.”
(Moyra Turkington)

“If you relax and come without concrete expectations things will turn out fine and you’ll have a better time.
It depends a little on what sort of person you are – my advice for people Just Like Me is to be prepared to make your own fun by helping other people have fun, either by supporting their interesting things or by creating interesting things for them. If that’s difficult or intimidating, remember that everybody wants you to have a good time, and it is never inappropriate to ask other players or the administrators to help you find something engaging to jump into.
It is also OK to just make stuff up most of the time. As Graham suggests, you may find yourself surprised at how pleasurable it is just to be someone else for a while, even without big adventures.
And it can also be freeing – no one knows or cares that you are shy and awkward in real life (or whatever), so you can and should get involved and talk to strangers, make friends and get in trouble. Your character is your alibi.
Oh! And be prepared for the possibility of heavy emotions – even at a silly wizard larp. Just tuck away the notion that stuff might come up that is affecting on a personal level so it doesn’t come as a total surprise. It may not, but it might! You never know.”
(Jason Morningstar)

“I also wanted to add one of the big lightbulb moments I had in Just a Little Lovin’. They have a metatechnique called ‘the Green Drink’ at midnight, which is both an IC and OOC mechanic for players to decide whether they want to take their game in a different direction or play harder with the dynamics in which they’re currently engaged. I realized this technique, essentially, gives players permission to step out of the role and decide what would improve their own play experience – it’s like an invitation to steer built into the game. Story Games do this sort of thing all the time, but in long, full-immersion larps, I can often feel trapped in what the character is thinking/feeling/experiencing and being ‘authentic.’ Knowing that I have permission at any time to steer toward the experiences I most enjoy helped a lot.”
(Sarah Lynne Bowman)

“Relax.
Remember that you can’t do it ‘wrong.’
Be honest with yourself about what you are looking to get out of the game.
Finally, remember that it is a game, but friends last forever. And after the weekend, you’ll have about 60 new ones.”
(Clinton Rickards)

“Be open, make shit up without being afraid of being wrong, tell people what you’re looking for, help other people have fun, be generous, and be good to yourself during and after because you don’t know what emotions can hit when. Lean into it.”
(Nicole Winchester)

“Reach out to your close in-game relations in advance. You’ll learn how much chemistry and co-creative energy you share, and start creating fiction early so that you yourself believe that you’ve known this person forever.
Talk through and make plans with players off-game BUT keep open to random encounters and downtime in-game.
Figure out halfway through the larp what themes you actually seem to be exploring with the character (rather than what you expected to explore). Ask yourself a loaded question at that moment (‘How far am I willing to go to protect the king?’ ‘What friends do I really have?’) and see how your play in the second half answers it. The results might surprise you!
Eat. Drink. Breathe. Socialize. Stay in the moment, and don’t nurse any regrets about what you didn’t do.”
(Evan Torner)

“Don’t feel intimidated by the other players seeming like they are completely at home and are awesome roleplayers. They are asking just the same questions inside as you are.
Take the opportunity of OOC breaks to reconnect with yourself, and also to think about your character’s journey – steering while IC is fine but I think it’s easier to think about it clearly while OOC.
Have casual encounters – like in real life, not every conversation has to be meaningful. The longer timescale means you don’t need to be driving story constantly. Simple exchanges of pleasantries, or whatever, will help you feel your way into your character and how they relate to the world.”
(Mo Holkar)

“I’d only add: ignore any and all advice here that won’t work for you. Different people need different strategies. Maybe some work for you, maybe none. Take what you need.”
(Nicole Winchester)

Thanks, everyone, for contributing these terrific answers!

What would you add to the suggestions, if you’ve got experience of this kind of larp yourself?

Or what would you like to ask and have answered, if you’re considering playing in one?