Does making art drive you mad? Or is it your fellow-artists and family? Find out in this game!

Adam James was commissioned to create a video installation about the artist John Currie as part of an exhibition of Currie’s work at AirSpace Gallery, Stoke-on-Trent, and decided to base it around a larp. The underlying basis was Nathan Hook’s freeform Black Dog, which is a group study of depression through the lens of identity theory. Players mutually create a character who suffers from depression, and each takes responsibility for a different aspect of that person’s social identity (work, family, relationship, etc) as they together play through an intensifying sequence of scenes representing a spiralling downwards into the depths of the condition.

Self portrait, by John Currie (The Potteries Museum & Art Gallery)

So in Adam’s version, the game was played as a larp; and rather than the players creating an arbitrary character as the focus, the character of John Currie himself was used. (He was (historically) depressed, and committed suicide, having first murdered his girlfriend.) Adam ran the game three times on successive nights at the beginning of September 2014, everything being filmed, with most players taking part in one or two sessions, with the aim of cutting the material together into one piece. I played in the third night.

Adam had prepared costumes (or rather, recognizable costume elements) for Currie and the other key figures in his life – particularly the group of fellow-artists that he used to hang around with, the Slade Coster Gang. They are depicted, along with Currie himself, in his painting ‘Some Later Primitives’ which gives the game its title.

This was a really interesting and stimulating play experience. Perhaps because it was the third run, Adam as GM was very creative with the scene structure, setting up scenes with a variety of techniques – getting weirder as Currie (who was played by each player, depending on which aspect of his identity was under pressure in that scene) descended into madness. So it started with some fairly straight scenes establishing his relationships with his friends and his desire for commercial and artistic success, then progressed into hallucinatory drug-induced visions, blindfold walking propelled by unseen hands in the afterlife, a flash-forward into a future where Currie’s son defends his work against art-establishment critics, an allegory involving a tribe of apes fighting a leopard… 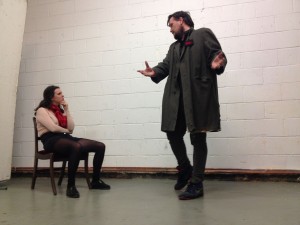 From the game: John Currie (seated) is hectored by his friend Mark Gertler (Photo by Jim Holt)

The other interesting aspect was that Adam didn’t want us to be wedded to the historical details of John Currie’s life, or of his work, but rather to be inspired by it. So while improvising within scenes we came up with a few things that turned out to be unhistorical, but that made sense for the story as it evolved. That’s fine for the game and our enjoyment of playing in it, but I’m not sure how it works for the art installation, if the video’s being viewed by people who want to know more about the actual Currie’s life and death. [Hoping to watch the video soon and see how Adam’s worked it into a whole.]

I like the freeform-cum-larp structure that this game used, because it allows for a dynamic restructuring of the story as the game progresses, in response to player creativity and the GM’s sense of the flow of time and emotion. Larp is often subject to the Aristotelian unities of time and place, which lends power to the drama but can be restricting: use of meta-techniques to break those unities is commonplace these days, but they can only go so far before becoming intrusive. This much freer GM-directed structure meant that although it was a wild ride at times, we ended up in a satisfactory place both for the story and for the emotional/psychological drive that the game was designed to explore. It does require quite a bit of trust, of course, but I think everyone had played with Adam and with most of each other before, so we were all able to embrace it without fear.