Commerce versus the dream. Craft versus inspiration. Single-minded vision versus compromised collaboration. Rising stars versus fading suns. Skinny-dipping versus keeping your clothes on… all are tensions that artists have grappled with down the ages. And in Lizzie Stark’s new game In Residency, you can take them on, chew them over, and spit out the pips. But not in the pool, please. That blocks the filter.

Getting away from it all

In Residency (run in London a couple of weeks ago by Hope Gilham) looks at a collection of artists staying at a luxurious artists’ colony (called ‘Brython’) over the summer. Their needs have been generously provided for; they have time and space to work during the day, and time and space to socialize in the evenings. Each player chooses a character skeleton from those provided, draws a trauma from the selection given, and decides what kind of art they make. Then four scenes of pretty much unstructured play broken up by brief interludes make up the game.

Lizzie describes In Residency as an American Freeform. The game is designed into that interesting area where larp, freeform and storygame overlap. It’s fully embodied, like a larp;  it requires some direction and uses some meta-techniques, like a freeform; and it consciously builds in narrative drives, like a storygame. In the spirit of ‘if you’re standing up, it’s larp’ that’s how I mostly think of it. But work like In Residency helps to blur the boundaries further, which is all good, to my mind. 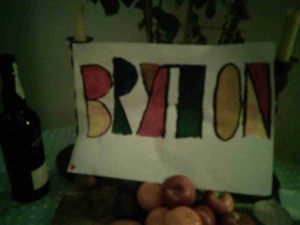 The Brython logo, as painted by Michael

In Residency is written with a strong expectation of affairs and gossip about affairs – about who’s secretly seeing who, or who might be, or who ought to be, even if it’s not actually happening. It includes a meta-technique for sneaking off together. In our game it didn’t quite happen that way, as neither affairs nor gossip turned out not to play a very important part. We were mostly grappling with big questions of artistic worth, career trajectory, ‘selling out’, and painful or dangerous personal decisions. I expect that if we’d had longer, we’d have explored more interpersonal stuff, but as it was I felt the time allocated was pretty satisfactorily filled without too much need for that.

The game sets up with each character linked to just a few of the others, but the setting makes it very natural to mingle in twos and threes and ask about each other’s stuff and talk about your own. I think I had good interactions with every other player, without having to seek anyone out. And the ‘end of summer’ dynamic allowed people to very satisfyingly expose and resolve their issues in some strong scenelets.

I don’t want to make it sound stodgy and worthy, though, because we also had a lot of silly fun with the material – as is perhaps inevitable when playing with notions of the tortured modern-day artist. It would be easy (and entertaining) to play In Residency completely as satire of the art world. We managed about half teasing, half serious investigation, which felt about right for our particular group.

I should say something about how In Residency is presented as a book, which I think is really exemplary in its clarity and usability. It sets a new standard in how to structure and explain larps and freeforms for third-party use. I’ll certainly be drawing on it as a model for my own stuff in future. It talks through every aspect of the game in detail and from every angle, and without fear of repeating material where that will be helpful.

Instructions for the preparatory workshop are highly detailed and properly explain to the facilitator the techniques and unfoldings to be used, which is always a good feature. It includes some exercises new to me and which made me think about my own practice. And it makes good use of guided meditation, a prep technique which I’m beginning to think is indispensable for a ‘serious’ game.

But is it art?

Well, I don’t know about that, but I know what I like. And I liked In Residency. It provided a great framework for a bunch of inventive players to riff off each other while exploring some fun and interesting material: and that is a large chunk of what you might want from a short larp/freeform.