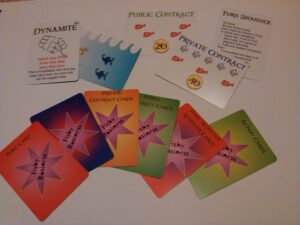 I was wised up to this competition by Brett J Gilbert, who won it in 2011 with the game that later became Divinare. To be honest, as Fishy Business is the first card game that I’ve actually properly designed, I hadn’t really thought of doing anything with it other than laying it aside with relief when finished. Out of 85 submissions, a max of 20 got shortlisted, and these will be playtested to weed them down to a max of 6 finalists. So that phase will be the real test of if people think it’s any good or not. But it’s quite nice to think that it’s got over a small hurdle of approval!

(If you’re new to it, Fishy Business is a game where you move a boat around a randomly-generated sea, catching various types of fish to sell against contracts which give higher value to different combinations of them. There’s an earlier post about it here. I’m pleased with it as a project because through a series of testing and redesign iterations it turned from a very stodgy and fiddly game into something quite tight and playable.)

Good News Mo! I sincerely wish we lived reasonably close I’d love to see you in action. I have a board I started to develop with my son several years ago but I hit a brick wall on the board layout. I’m hoping to start back to work on it this year. We’ll see if that happens.

Thank you! Mm, layout is a really tricky area. I’ve stuck mostly to card games so far, which have their own issues of how to carry information concisely yet clearly, so I haven’t tried a complex board layout. Maybe this year…