Denmark, 12th-15th February 2015. A conference about Nordic larp. But more than that — a gathering-place for wonderful thoughts, crazy ideas, intriguing games, marvellous people, unbelievable experiences. A buffet of goodness from which you can make your own selection, and a welcoming community which will value you and what you bring. 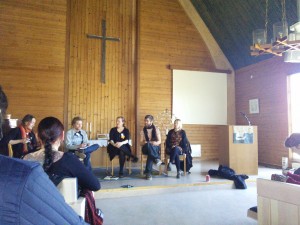 A discussion about pre-game workshops at KP2014

Knudepunkt — also known as Knutpunkt, Knutepunkt or Solmukohta, depending on which country it’s taking place in — is a conference which rotates around Denmark, Finland, Sweden and Norway; now in its 19th year. It consists of a programme of talks, discussions, workshops, presentations and games, all in some way related to the interests of Nordic larp — backed up with an intense social programme of parties, activities, and talking talking talking.

This year, the conference is going to be bigger than hitherto, and part of the organizers’ mission statement is “We want to make Knudepunkt 2015 a place for everyone who wants to contribute to or get inspired by Nordic Larp.”

So outsiders, newcomers, “people from other roleplaying communities and disciplines like performance and experience design”, and anyone who’s just generally intrigued by the concepts and/or the practice are encouraged to attend. And this year in particular the programme is going to be more focused on newcomers, and the event as a whole more open to people who haven’t been before. Does that sound like it might be you?

I’m not going to go too far into that now… suffice to say that it’s a particularly interesting and exciting larp tradition that benefits from a great deal of thoughtful discussion and analysis. You can read more about it here on Lizzie Stark’s blog, here in the transcript of Jaakko Stenros’s talk, or here on larping.org: or watch this great video presentation by Johanna Koljonen. And of course there’s Nordiclarp.org as the reference point gathering anything and everything. 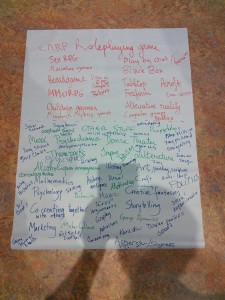 So what happens at Knudepunkt?

There’s a good summary page here which collects links to various attenders’ accounts of their own experiences at the 2014 version, which was held near Gothenburg. It also includes materials from various of the programme items, reviews of the conference books, playlists from the big Saturday night party…

If you’d like to get a sense of the enthusiasm and delight that people experienced and expressed, go straight to 93 things to consider if you plan on going to KP2015 in Denmark, a pdf collection of brief splurges that Claus Raasted put together. Or if you prefer to watch, here’s Larp Lab, Lizzie Stark and Petter Karlsson’s video diary of the con.

If you want to make more of a trip of it, the three days of Knudepunkt are preceded by A Week in Denmark — a programme of events (including a new festival of black box larp) introducing all aspects of Danish larp culture.

Last year it was 300 or so people, from I think 37 different countries. Mostly from the Nordic nations, of course, but other than that from pretty much all over the world, including as far as Australia, Japan and Tanzania. 13 people went from the UK — one of the biggest groups — and 6 from the USA. This time round the organizers want to go up to 500 people, so I expect there’ll be more from other countries, and some from altogether new places.

The UK bunch this year was interesting because only a small proportion were actually British larpers/freeformers: the rest were larpers from other countries living in the UK, or people from other areas of gaming, or people from performance arts to whom larp was another means of expression… and included a few completely new to larping, and one person who’d never done any kind of role-playing before. So whoever you are, you will fit in!

That’s what I was like this time last year! Drop me a line if you’ve got any questions, or want to know more about any of the details, or want to know about the KP buddy system and the various other things in place to help new people feel at ease. I wold love you to come along.