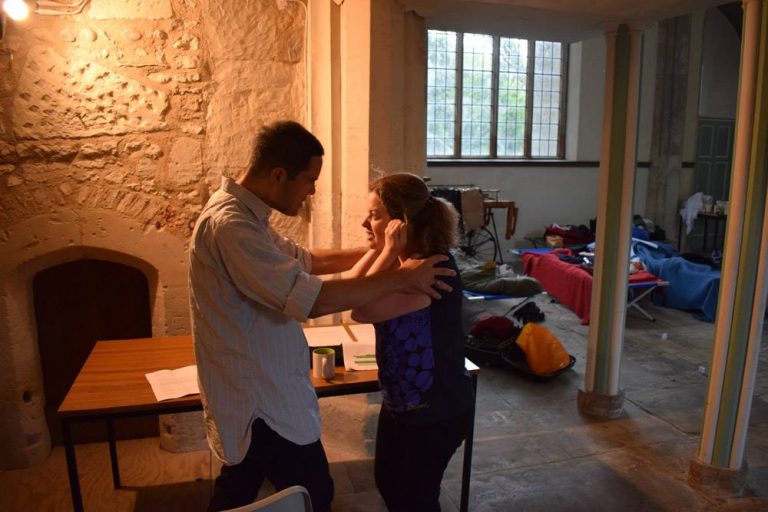 A flashback scene in the pre-larp workshop – my character Delkin and his little sister Freya, reacting to her first gruesome prophetic vision. Photo: Andy Tatton.

Dawnstone was a one-off 16-player larp, lasting about 20 hours all in, which took place in Cambridgeshire a few weeks ago. Designed and organized by Joanna Piancastelli with the help of Andy Tatton, it was based upon her tabletop RPG Before the Storm, in Pelgrane Press’s Seven Wonders collection. 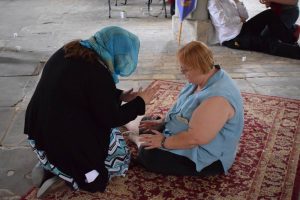 Some of the lowlier defenders, skulking about on the carpet. Photo: Andy Tatton.

The setting is a fantasy world, the characters being defenders of, and refugees in, the last holdout against the onslaught of a terrifying and inimical enemy known as The Stormsworn. The larp played out in real time over six hours, leading up to the final battle.

I’m not going to go into laborious detail about how it worked and all that, because Joanna’s written in some depth about it herself, and that material is highly informative and interesting. I want to focus on what I found most innovative – the depth of co-creativity in the design. 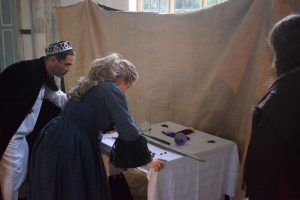 How did that work, then? 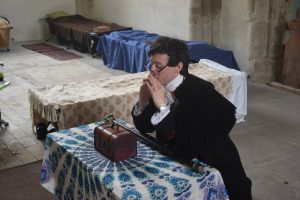 So: each player came up with the basic idea for their own character, but then six other players had authoritative design input into that character – details of their personality, life, and relationships were created thus, and offered to the player to accept or tweak. Each player wrote, for (a different) one of the other players’ characters, one of these elements: a stable relationship; an unstable relationship; sources of hope; sources of despair; a defining life moment; and an answer to the character’s fundamental question. And background details about the world, its nations, its technology, its magic and so on were also crowdsourced from among the players.

There was a fair amount of leadtime needed for all this, of course, and of chivvying players to complete the assigned tasks. But in general it was done in a terrific supportive and creative spirit, and meant that each character had a bunch of stuff that the player themselves might never have thought of.

And was it good? 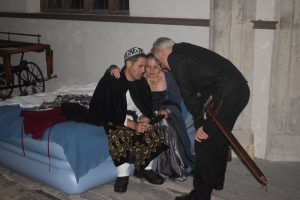 The Delkin family, about to do their worst. Photo: Andy Tatton.

Yes! This approach allowed for a rich and detailed network of interests and links, and it meant that players were reasonably familiar with a larger number of the other characters than they would normally be on a cold start. This is for me a great example of how larp can draw on, and adapt, ideas and techniques from modern tabletop storygaming. If you know of any other larps where players have this sort of formalized creative input into each others’ characters, please do let me know!

The other thing worth noting here was that Dawnstone took place in a church – still consecrated and active. There are a number of these around the UK, which are available for booking for ‘church camping’, or ‘champing’, at the champing.co.uk website. It made a terrific venue, and apparently they were totally fine with what we were doing, as long as it wasn’t sacrilegious and we were out by 10am on the Sunday. And it was very affordable. I foresee church larping, or ‘charping’, becoming a thing.

Overall Dawnstone was a tremedous amount of fun! I had a great character to play, thanks to my fellow-players’ work upon him: and the overall story arc was dramatic and thrilling, the mood was atmospheric, the organization was smooth and efficient. It was particularly nice to get to larp with an assortment of lovely people from other areas of larp than I normally manage, as well as with a mix of old and newer friends.

It wasn’t massively immersive for me – there was a lot of steering, as I often find the case when playing a character with a load of responsibilities – but there were enough deep and powerful moments to make the whole thing very satisfying. So, definitely recommended – get in quick if it runs again!